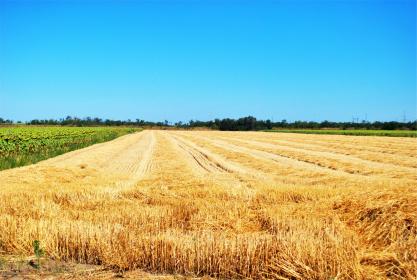 Here is a brief excerpt from Seattle University School of Law.
(You can see the complete article at: SSRN.com)

According to the United Nations Food and Agriculture Organization, 75% of the world’s food crop diversity was lost in the twentieth century as farmers abandoned local varieties in favor of genetically uniform high-yielding crops. Although thousands of crops have been cultivated since the dawn of agriculture, twelve crops currently supply 80% of the world’s plant-based dietary energy. Just four crops – rice, wheat, potato, and maize – supply nearly 60% of plant-derived calories and protein. In addition to relying on a small number of crops, the world’s food supply also relies on an alarmingly narrow genetic base. Genetically uniform, high-yielding varieties have supplanted traditional varieties for 70% of the world’s maize; 50% of the wheat in Asia, Africa, and Latin America; and 75% of Asian rice. While Indian farmers cultivated 30,000 wild varieties of rice in 1950, only fifty varieties are projected to remain by 2015. The dangers posed by the genetic uniformity of the world’s food crops can best be illustrated by the Irish potato famine of the 1840s. Native to the Andes, the potato was introduced into Spain in 1570 and into England and Ireland in approximately 1590. For over two centuries, all of the potatoes cultivated in Europe descended from these two introductions.

CLIMATE CHANGE AND GLOBAL FOOD:  Because of the uniformity of the Irish potato crop, a single infestation was sufficient to produce widespread devastation. The Irish potato famine lasted for five years, and resulted in the death of as many as 2,000,000 people and the migration to the United States of a comparable number. Eventually, potato varieties resistant to phytophthora infestans were discovered among the thousands of distinct potato varieties in the Andes and in Mexico, thus enabling potato cultivation to recover in Ireland. If some of these resistant potato varieties had originally been planted in Ireland along with the more vulnerable varieties, then the Irish potato famine might have been averted. The Irish potato famine is a tragic example of the vulnerability of genetically uniform crops to pests and disease. Unable to rely on their own natural defenses, genetically uniform crops typically require significant agrochemical inputs to survive. However, pesticides kill beneficial organisms as well as target pests, and typically lead to the resurgence of pests, outbreaks of new pests, and pesticide resistance. In contrast, genetically diverse crops are more resilient than genetically uniform monocultures because some varieties are able to resist pests, disease, and adverse weather conditions to which other varieties might succumb.30 Indeed, cultivating different crops and different crop varieties has historically served as an insurance policy for farmers — a means of protecting their livelihoods.

Pesticides often destroy the natural enemies of pests and thereby produce pest resurgences. They can also generate outbreaks of new pests by killing the natural enemies of species that were not previously pests. In addition, pests that survive the application of pesticides can transfer genetic pesticide resistance to their offspring, causing an entire insect population to develop resistance to pesticides.

Regrettably, agrobiodiversity is under threat world wide – along with the local knowledge and skills required to cultivate and utilize different wild and harvested plant species and varieties. The main reasons for this global crisis are the rapid expansion of industrial agriculture, the Green Revolution, the globalization of the food system and consequent marginalization of small-scale farmers, and the replacement of local crop varieties by “improved” non-native varities.

Local cultivation practices often disappear due to the intrusion of foreign technology that promises farmers short-term gains in the form of higher yields. High-yielding crop varieties may thrive under favorable weather conditions, but they can also fail spectacularly under adverse conditions. It is therefore vitally important to protect and preserve the skills, customs, traditions, and technologies of small farmers as these skills form one component of an integrated system of agricultural knowledge. The diverse plant varieties under the stewardship of the world’s small farmers are vital to global food security, not only for their ability to ward off catastrophic crop failure, but also as a source of the raw germplasm used by plant breeders to develop crops that can withstand environmental shocks.

The Green Revolution was a public sector initiative designed to combat world hunger by breeding and distributing new varieties of staple crops (primarily cereals) that produced high yields in response to the application of fertilizer and irrigation. While the Green Revolution was extremely successful from the standpoint of food production, it accelerated the loss of traditional crops and crop varieties. By the 1990s, Green Revolution crop varieties comprised approximately 70% of the world’s maize, over half of the wheat produced in Asia and Latin America, and nearly 75% of the rice cultivated in Asia.

Historically, plant breeders have used the diverse characteristics of traditional crops to select particular traits, such as drought resistance, tolerance for heat and cold, and resistance to specific pests and diseases. Because traditional crops have survived in farmers’ fields for thousands of years amidst pests and diseases without chemical inputs, they usually possess a wealth of valuable characteristics. If traditional varieties cannot supply the needed traits, plant breeders typically turn to “wild relatives” – wild or weedy plants closely related to cultivated crops. Plant breeders have used wild relatives to breed many cultivated crops, including sugarcane, strawberries, black pepper, peanuts, potatoes, tomatoes, tobacco, maize, wheat, and cacao. Sadly, wild relatives are increasingly at risk as a consequence of the loss, degradation and fragmentation of natural habitats, and the continuing industrialization of agriculture. Genetic diversity also has value beyond the ability to fight pests and disease. As weather patterns become less predictable and agricultural yields decline, plants that currently have little or no economic value may become very important as sources of food and medicine.

Although the planet contains at least 75,000 edible plants, humans have historically consumed only 3,000 plant species, only 150 of which have been cultivated on a large scale. Similarly, while one fourth of all medicines and pharmaceuticals are derived from plants, animals, and microorganisms (including analgesics, tranquilizers, contraceptives, diuretics, and cancer-fighting compounds), only 3% of the world’s flowering plant species have been tested for medicinal properties. Regrettably, the dangerous decline in the genetic diversity of the world’s cultivated crops is taking place at a time when the planet is losing wild plant and animal species at a rate 100 to 1,000 times the historical average – a rate of extinction unparalleled since the Cretaceous-Tertiary extinction sixtyfive million years ago that resulted in the disappearance of dinosaurs.

In sum, the expansion of industrial agriculture has narrowed the genetic base of the world’s food supply, and has increased the likelihood of catastrophic crop failure in the event of drought, heavy rains, and outbreaks of pest and disease. In addition, the loss of genetic resources and the loss of local knowledge about traditional agricultural practices compromise the ability of farmers and plant breeders to develop plants that will resist future environmental shocks, including those associated with climate change. All of this is transpiring at a time of unprecedented extinction of wild plants and animals.