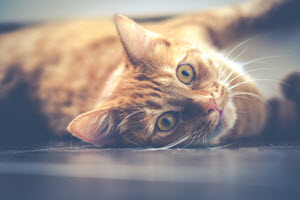 This is the story of three little kittens from shortly after birth until they are old enough to work on the farm.

In this family farm history video a farm wife finds a mother cat with three newborn kittens in the barn. After the kittens have had their breakfast of mother’s milk, the mother cat climbs up the kitchen door. She is rewarded with a breakfast of cream.

When the kittens are two weeks old and their eyes are open. They are still living on a pile of hay in the barn. A hen pecks near them, so mother cat moves her family one at a time. She finds a sunny spot on the seat of an old buggy outside. When one of the kittens is left alone he is threatened by the hen, but soon is rescued by the mother cat.

After three more weeks, one of the kittens attempts to get milk from the mother cat and is refused. But a pan of milk set on the floor furnishes them all with plenty of milk. After dinner, the mother cat washes the kittens’ faces. They play with each other and with a ball of yarn.

At the age of two months, all the kittens have learned to wash their own faces after each meal. When the mother cat goes for a walk, all three follow. On the soft bark at the base of an apple tree, the mother cat sharpens her claws. Then she looks up and leaps into the lower branches. By this time the kittens are far behind, but they soon catch up and join their mother in the tree. Left alone on the ground, one little kitten stiffens and spits when a big dog comes close. He is brave, but finally decides to climb the tree to safety.

Now the three little kittens are old enough to work.

When the kittens are old enough to work, there is not enough for all of them to do. So, the farm wife takes two of them to town to give them away. She gives one to a shoemaker and the other to the postmaster. After they have been received into their new homes, the farm wife returns to the farm. As she picks up the third little kitten the commentator says that this is the luckiest kitten of all.