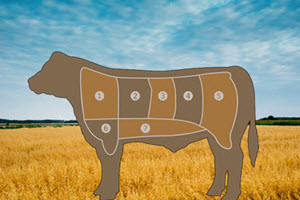 Farm History quiz – Do you know which quarter of beef
the sirloin comes from?

If you don't know the answer, don't worry. You will find the answer here.In this living farm history video we see the complete beef cycle from cattle on the open range to burgers on the barbecue grill.Since this is a two part video you will get some questions answered in Part Two also.

I am not in this video, but I sure could be. I did everything in this video while on my Grand Parent's farm in my earlier days. What a life… but I digress. My Grand Father was a Hereford man. For whatever reason,he was dead
set against Angus. I never really understood why, and I knew better than to ask. It was just one of those things.
I also loved the Hereford breed and took it for granted that everyone in the world had great steaks too.

My Grand Pa would butcher two or three times each year and since he had three sons, 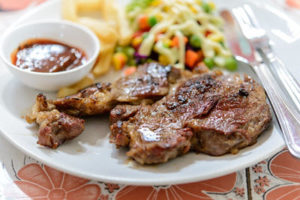 the family would divide the beef four ways, so this time my Dad would get the
front right quarter, next time the front left quarter, and so on.

05:18 – 08:47 Cowboys on horses round up cattle in the fall.
Cattle in holding pens, grazing. Cowboys leading herd,
cattle drives.

Vintage farm history videos like this were used extensively
to educate people, just as videos are used today.

We hope you enjoy this look into the past.