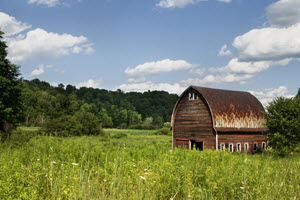 Another in our series of farm history videos

A simple and moving farm history video of Henry Browne and his family and what they are doing individually and collectively to win the war. Farmer Browne goes about the daily tasks of farming, so important in wartime. He plants fifteen acres of peanuts so that we will have more vegetable oils, needed so urgently. He conserves his land and takes care of his equipment. He greases his farm tools to prevent rust.

Henry Browne's family also do their jobs. Mrs. Browne has a Victory garden, Young Henry milks the cow, sister has a flock of chickens, and the eldest son is serving with the 99th Pursuit Squadron of the Army Air Forces. The film ends with the family's visiting the Tuskegee air field.

It is fascinating to look back at attitudes and feelings about the war effort. This generation has been referred to as our "greatest generation" because they had to face an enemy that wanted to rule the world. Everyone felt it was their duty to play a part. Instead of from farm to table, this is from farm to war effort.

Scenes include: A little boy in overalls milking a cow in a pen.

3:02
Henry Browne saddles his mules and begins walking by his peanut field with the two mules.

4:29
The little girl tends to the chickens. She feeds the ones walking freely and then those in the cage.

4:52
Nice view of the field with Henry Browne and his mules plowing in the distance. The mother and daughter come into the frame. Cut to a closer shot of the boy working the fields.

5:59
Nice pan of the intricate rows of a peanut field.

7:30
Series of shots of the Browne family going to town in a horse drawn carriage. First image shows them coming onto Main Street where there are stores, cars, and several people standing on one side of the street. As they round a corner we see a group of men sitting on the curb. Cut to a view of the Browne's coming towards the camera on a different part of Main Street. We see the movie theater. Cut to them on a different road in town.

8:38
Nice image of the Browne Family walking with an African-American air force pilot. They walk along an air force base. An army vehicle passes them as they walk towards the plane yard.
———————————
This was especially poignant at the "grease the tools" statement since that is exactly how my Grandfather taught me. He kept all motor oil that he drained from the truck, car and tractor. Any tool, including big ones like the disc and plow had to be scrubbed with an iron brush at the end of the day and painted with motor oil. Nothing ever rusted. This farm history video shows farming as it truly was during those years.