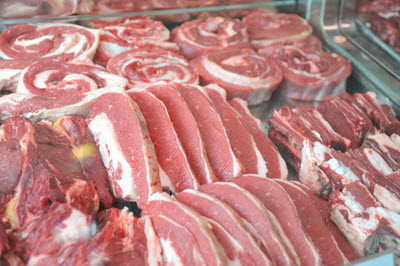 As if the competition wasn't already tough enough on our local meat producers, our government has sold out to Mexico and Canada, who were complaining for years that they weren't being treated fairly.

So, what does this mean to you when you shop for meat? Now, more than ever, you won't know where your meat was raised, slaughtered, or processed.

Not a clue where it came from.

Now our small American farmers are put at an even greater disadvantage. First introduced in 2009, country-of-origin labeling has been valuable to the small American farms that promote their livestock as being born and raised in the U.S. Consumers have agreed and increasingly been buying locally. Witness the growing number of farmers' markets that also sell meat.

Canada and Mexico were going to impose up to $1 billion in tariffs on American goods sold in their countries. So, congress decided to stick it to local American meat producers.

Sure wish there was a nice way to say it, but that's the truth.

Lawmakers quickly added the provision to the $1.15 billion spending bill passed last month, which has now passed into law. In plain English it's called "deceive the consumer, they'll get over it".

Here's a quote from: Roger Johnson of the National Farmers Union, who said the group was "furious" about the repeal. "Packers will be able to once again deliberately deceive consumers," Johnson said.

If you think the Chipotle E.Coli outbreak was bad, just wait.

Here's where the argument stood in June 2015:
Wall Street Journal

Want to know more? See what Forbes has to say:
Forbes

And now we have Mystery Meat

While you're at it, here are some
Myths about meat